BATTLE OF THE BRAINS

The cause is incredible, the crowd is high-profile, and teams compete for the coveted Battle Cup!

Imagine an intense family game night… but bigger! Hosted each year in Toronto, ON, Battle of the Brains is a notable black-tie fundraising gala in the world of Toronto fundraisers. The event brings together professionals from some of the city’s most prominent and influential businesses under one roof for an all-out battle of knowledge, brain power and rapid-fire thinking.

The gala includes a cocktail reception and gourmet dinner; however the main feature is an interactive game where teams go head-to-head against each other in our renowned Trivia Challenge to win the coveted Battle Cup (and bragging rights!). For one night, Toronto's brightest (and most competitive) professionals battle to answer a series of trivia questions on everything from popular 80's lyrics to Gangnam Style (One of the questions even involved identifying the 'mystery spice' on your table using only the sense of smell!). The gala is also hosted by a special celebrity guest each year, ranging from Robert Herjavec to Dolly Parton throughout past events!

Battle of the Brains Annual Gala

Battle of the Brains is pleased to return in 2022 with the theme of Bright Futures, Bright Minds

Join us in-person to celebrate what is possible for children when barriers are removed and experiential learning opportunities are unleashed. We also celebrate the resilience and determination of students and teachers alike throughout the past two years and look forward more experiences to spark the minds of all students.

Let's celebrate unlocking the potential of bright minds and bright futures for learners across Canada! 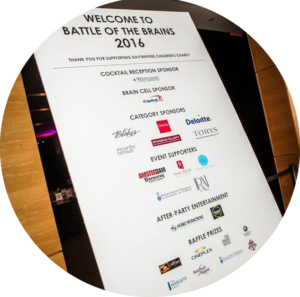